Soya was imported from for example the USA, Brazil, Argentina, Paraguay, Canada and Ukraine. In Brazil and Argentina, soya is mainly produced in the Brazilian Cerrado and the Argentinian pampas. In addition to direct import there is also significant intra-European trade of soya beans (1201), oilcake (2304), soya bean flour and meal (120810) and soya bean oil (1507). 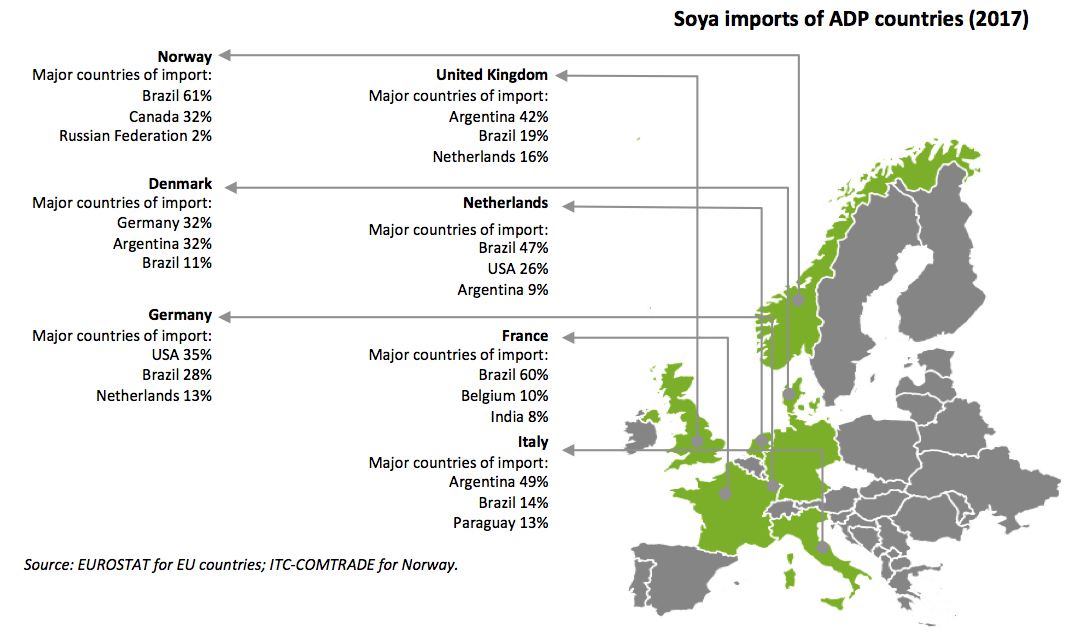 Examples of what we do

The ADP facilitates and supports the development of European National Soya Initiatives (ENSI). National sustainable soya initiatives have been developed by a range of European conveners to support soya users transition to sustainable soya supply chains. While some have been established and working towards this goal for several years (such as the Dutch and Norwegian) others are relatively recent such as those in Denmark and the UK. Under the umbrella of the Amsterdam Declaration Partnership (and its member governments) these conveners have come together to explore how to support their members but also how they can better collaborate to create more meaningful impact and provide a common market signal. On 29th January 2020 this culminated in the signing of a joint statement of support for soya that is legal and protects forests and valuable native vegetation:

At the moment, we do not know how much of the soya imported by Europe is certified but global soya certification is still very small. In 2014, soya was harvested on 117 million ha (FAOSTAT) and only 2.4% was certified (1.9%) (Lernoud et al (2017), State of Sustainability Markets).

The IDH Sustainable Trade Initiative has defined palm oil as one of their focal commodities and IDH is implementing sustainable landscape initiatives in Mato Grosso, Brazil. The State of Mato Grosso not only produces 9% of the global supply of soy but is also a major producer of beef (the #1 driver of deforestation).

The AD-Partnership promotes the uptake of sustainably produced soya for example through certification by voluntary certification standard which have cut-off dates for deforestation such as RTRS (Round Table for Responsible Soy) and ProTerra. In several ADP countries national initiatives on soya have started. In the second half of 2018 we intend to organise a European Soya Meeting bringing together all the national initiatives to discuss experiences and work towards comparable commitments.

Some other relevant soya initiatives